A Day in The Life: Burnie Brae Transport Driver 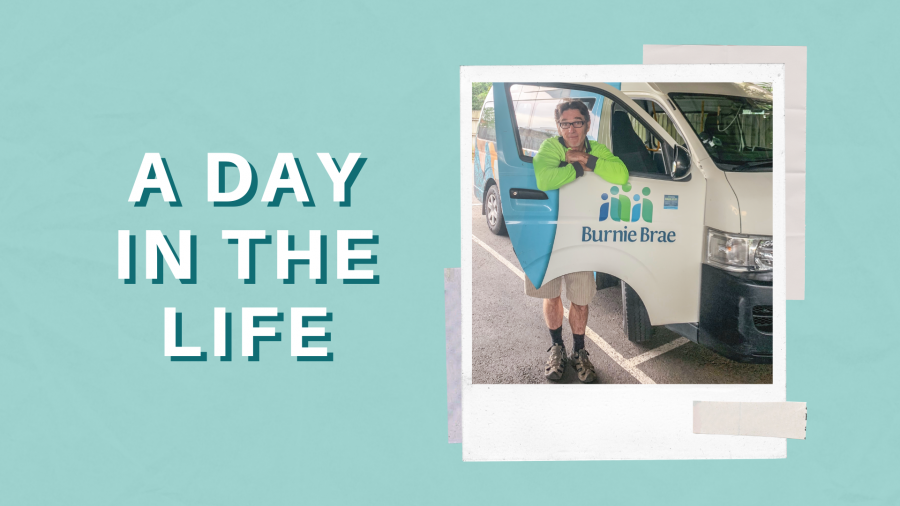 We recently had a chat with driver, Paul O’Sullivan who has been with Burnie Brae for two years.

Paul’s regular week involves general transporting on Monday, Wednesday and Friday, with trips shopping, to the doctors, hospitals and dentists. Tuesdays and Thursdays are set aside for the groups he affectionately calls ‘the shopping girls’ with ‘Paul and Ross on the Shopper Bus’. Shopping days involve having three or four people in the van, with a volunteer, so there is lots of chatting.

Respite pickups are another highlight for Paul. When the men get on the bus, the first thing they do is pay out on each other, with the fun and banter continuing for the entire trip. Paul says, ‘though many of the transport clients have their own struggles, they put their best foot forward’.

Paul describes many of his transport clients as ‘inspiring’, mentioning a particular gentleman who joined the army at age 13, who now comes into the Centre each week, as well as the many people who keep busy and make the most of life, no matter what. Mostly, people miss having their drivers’ licenses, as driving represents freedom, so the Burnie Brae transport services give them that touch of independence back. Paul is often thanked with ‘we don’t know what we’d do without you, Paul.’

Paul loves languages, which leads to some fun conversations. Knowing of his love for languages, one of his regular travellers always answers the phone in French! Other travellers often assume Paul knows exactly where they are – they’ll call and say ‘I’m at Dr such and such’, and he has to work out where Dr such and such is located! One of Paul’s regular pick-ups is a Cowboys supporter, who wastes no time in making fun of Paul with comments like ‘how are those Broncos going?’, on trips to the hospital.

What do you like about driving at Burnie Brae?

The people are lovely and happy to see me. We’ve been to some interesting places, such as the Buddhist temple, various shows, movies, meals and of course, to Burnie Brae!

Communication – clients like to be able to depend on their transport the same time each week, so it’s important to communicate well when things change or if you’re running late.

Paul takes the time to engage and chat with the people he drives, learning their personalities and their expectations. For some people, the time chatting with Paul is some of their only social interaction of the day.